We Will Remain Bullish In Our Approach To Developing Oyo – Makinde 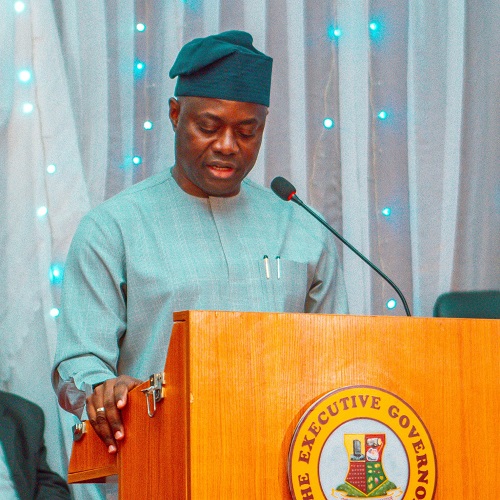 Oyo State Governor, Engineer Seyi Makinde, on Monday, presented the 2021 Appropriation Bill to members of the Oyo State House of Assembly, declaring that his Government will remain bullish in its determination to develop the State.

Governor Makinde, who stated that though the Government was able to grow the State’s Internally-Generated Revenue (IGR) geometrically in the last one year, recording a 26.4 percent year-on-year increase in IGR, it will not rest on its oars in its drive to take the State off its total dependence on Federal allocation.

According to him, the State hopes to achieve that feat by widening the tax net, bringing more tax payers into the system without necessarily increasing taxes on the people.

A statement by Mr. Taiwo Adisa, Chief Press Secretary to Governor Makinde, indicated that the Governor stated these at the House of Assembly Complex, Secretariat, Agodi, Ibadan, where he presented the 2021 Budget Proposal to members of the Assembly.

The Governor appreciated the members of the House of Assembly for their cooperation over the past months, saying the successes recorded so far were due to their continuous support of the Government’s fiscal policies, which have led to an impactful implementation of the Roadmap for Accelerated Development of Oyo State 2019-2023.

The Governor added that his administration was able to make significant progress in the actualization of its plans for the State in the last one year, saying: “We have been able to lower our infrastructural deficit, make improvements in healthcare delivery, improve the quality of education and achieve milestones in our security systems.

“We remained bullish in our approach to developing Oyo State. Let me share one of our biggest wins in the last year. You will recall that in my 2020 budget presentation, I had stated that from January 2020, we will be recording a monthly Internally Generated Revenue (IGR) of three billion Naira. I am happy to report to you that despite the effects of the COVID-19 pandemic on the economy, we were just less than two hundred million Naira shy of our target monthly. As at September 2020, we had recorded an IGR of 25.6billion Naira. And using the half-year figures, that represented a 26.4 percent increase in IGR year on year.

“Permit me to share some of our other wins from the 2020 fiscal year. You may recall, Mr. Speaker Sir, that one of the issues I highlighted that has been facing our State’s budget is underperformance. By the end of quarter one, (Q1), 2019 budget performance was 38 percent. We were determined to increase this and had set a mark of 70 percent performance. Honourable Members of the House, although we have not yet met up with our target, our budget performance as at now is above average at 50.32 percent. We accomplished this despite the economic shock induced by the pandemic.

“Let me quickly state that our use of the Alternative Project Funding Approach (APFA), the Contractor’s Project Financing Scheme, as well as targeted loans, have gone a long way to helping us to improve our budget performance.

Governor Makinde explained that the recurrent expenditure in the 2021 Budget Proposal stands at N136,262,990,009.41, while the capital expenditure is N130,381,283,295.63, saying that the larger share of N56.3 Billion or 21 per cent has been earmarked to the education sector, because his administration considers education as the only way out of poverty.

He added that the agriculture sector will receive an allocation of N9.5 billion, which is about 3.6 percent of the Budget proposal, stating that his administration’s plan to grow the State’s economy through agribusiness remains well on course.

The Governor highlighted how the administration, in the last one year, began a massive turnaround of the agriculture sector, with partnership agreement with the International Institute of Tropical Agriculture (IITA) on the Start Them Early Programme in agribusiness and the ongoing upgrade of the former OYSADEP Headquarters, Saki, now rechristened the Oyo State Agribusiness Development Agency (OYSADA), among others, to drive the focus on agriculture.

The Governor also said that the sum of N13.2 Billion was earmarked to the health sector, adding that the administration recorded tremendous achievements in the sector by turning the COVID-19 pandemic to an opportunity for aggressive turnaround of health facilities.

According to the Governor, the Government would go ahead with the revolution in the health sector with its plan to upgrade one Primary Health Care Centre across the 351 electoral Wards of the State, among other key efforts that will ensure the consummation of the works already started in reforming the health sector.

He said: “Mr. Speaker Sir, Distinguished Members of the Oyo State House of Assembly, please permit me, at this point, to present to you the Oyo State 2021 Budget Proposal. The total budgeted sum is Two Hundred and Sixty-Six Billion, Six Hundred and Forty-Four Million, Two Hundred and Seventy-Three Thousand, Three Hundred and Five Naira, Four kobo (₦266,644,273,305.04). This sum represents a 53.16 percent increase over the 2020 revised budget. Let me emphasise that the tenets of the Federation’s Fiscal Sustainability Plan (FSP) and other development aspirations were used as a guide in the preparation of the 2021 Budget.

“Mr. Speaker Sir, I must also mention that we have been able to resolve some of the issues around moribund industries in Oyo State. As you are aware, these have been a source of worry to members of this assembly and indeed the entire people of Oyo State. We have been able to put back in business state enterprises that have been laying waste for decades. Among these moribund industries are the Pacesetter Quarry and Asphalt Plant, Ijaiye; the Pacesetter Fruit Processing Plant in Oko; and the Agbowo Shopping Complex in Ibadan.

“It will also please you to know that we have commenced the preparation of the Twenty-Year Oyo State Development Plan (2021-2040). Oyo State has never had such an overarching blueprint. The plan, when completed, will facilitate a speedy socio-economic development with the Medium-Term Sector Strategy and Medium-Term Expenditure Framework.

“It has, once again, been my honour to present this budget proposal to you, Mr. Speaker Sir and Distinguished Honourable Members of the House. It is my prayer that you give our proposal the usual consideration in a timely manner so that implementation may commence; and Oyo State will continue on the path to accelerated development.”

In his speech, the Speaker of the House, Rt. Hon. Ogundoyin described the 2021 Budget as pragmatic and realistic, commending the Governor for ensuring the timely presentation of Appropriation and Finance Bills to the House.

This was as members of the House of Assembly, including the Deputy Speaker, Honourable Mohammed Abiodun Fadeyi; Majority and Minority Leaders, Hon. Sanjo Adedoyin and Hon. Asimiyu Alarape, respectively, as well as Hon. Wumi Oladeji severally commended the Governor for different reasons bothering on good performance.

While speaking, the Speaker equally lauded the Governor for the steps being taken to rebuild the State and place it on the pedestal of socio-economic growth and development, saying: “It is commendable that in the recent history of Governance in Oyo State, the present administration, ably led by our diligent and highly energetic Governor, Engr Seyi Makinde has ensured that Appropriation and Finance Bills are timely presented before the House.

“This is particularly praiseworthy as it enhances the proper and meticulous monitoring and evaluation of Budget performance and prevents wasteful spending and improper execution of Government programs and projects.

“Let me assure that, as a House, we are always ready to perform our constitutional duty of law-making in particular and to also ensure that the Executive arm of Government encounters no legal impediment in the performance of its functions for the overall welfare and wellbeing of the State and its residents.” 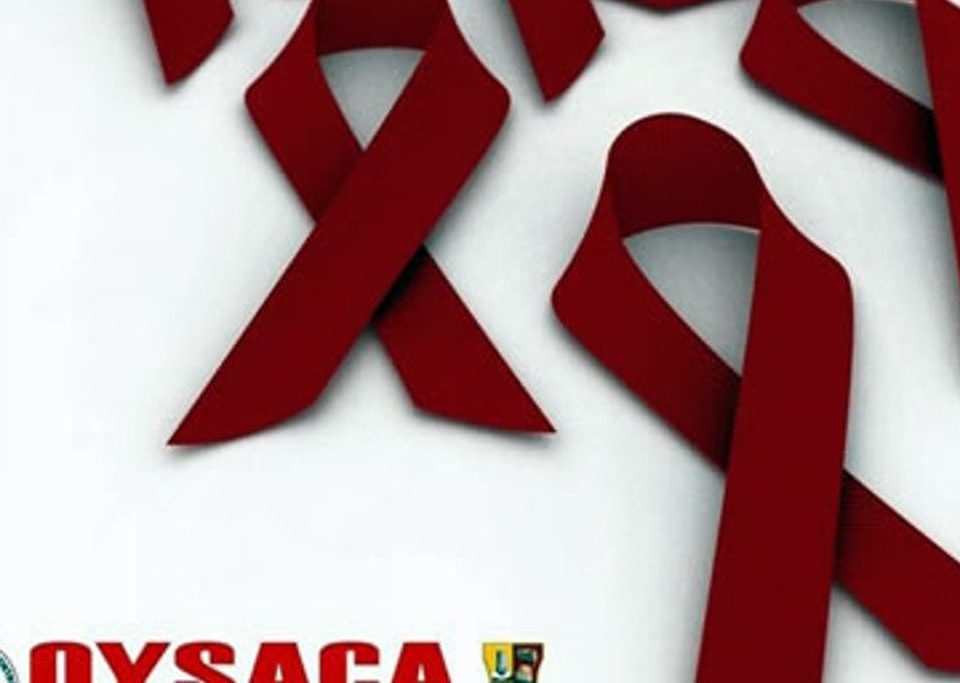 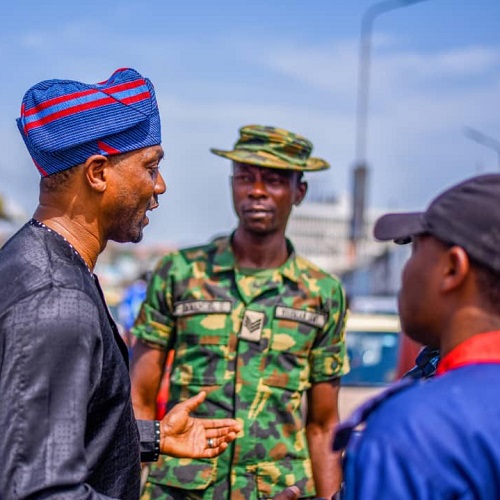 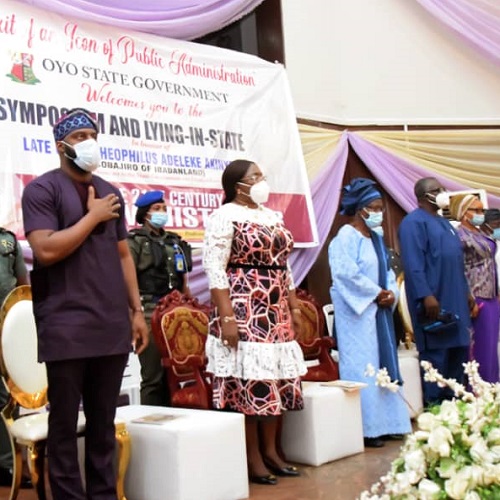